Why practising mindfulness is the key to nourishment: Lola Berry 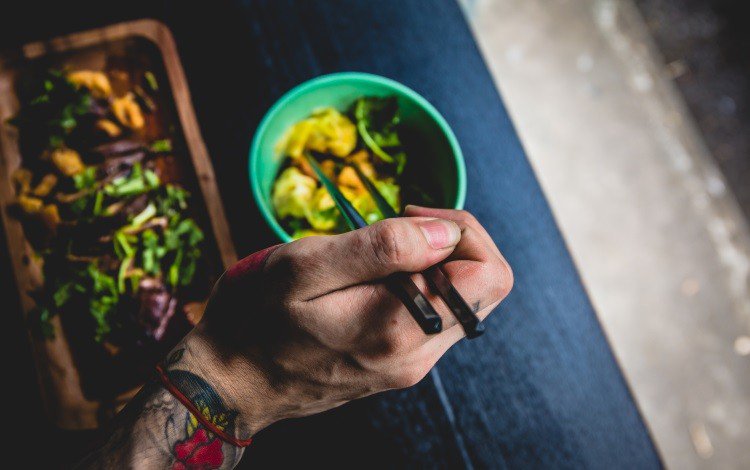 Read Lola Berry's tips on practising the art of mindfulness and how it can lead to nourishment.

I’m into the spiritual, hippy stuff, it’s true. It might sounds a little naff, but I can promise you this stuff is the key to obtaining health. Mindfulness is the key to nourishment.

Being in the moment will help you enjoy every second of the foods you are fuelling your body with.

When you prepare food, take notice of its texture and colours (generally the more colours in a meal, the more nutrients). Play good music - I love to listen to quirky folk stuff or even classic stuff when I cook as it puts our brain waves into delta mode - that’s when we have our “light-bulb” moment ideas!  If your cooking for someone you love, put loving energy into your food, make it the best meal this person has had all week, and when you are eating the meal with someone, take time to stop and talk, as opposed to shovelling it all down and talking at the same time.

Food is here to nourish and fuel our bodies but also to share with the souls we love, so it can be quite a special experience. Then when you’re eating it, chew it more than you normally would, try to pick the flavours. Listen to your body, you’ll find you get fuller quicker. Then enjoy the process of cleaning up, it’s all part of the process of food. Be aware and appreciate what you’ve just given your body. This is what mindful eating is all about, and you can be mindful not only when you eat but in every single aspect of your life. You will find you experience things on a deeper level and you will feel like you have a great perspective and understanding of things. Try it out, I believe you will be pleasantly surprised.

How to start mindful eating?

Do what's right for you:

Listen to your body:

Colourful, adventurous and with a healthy dose of Aussie eccentricity, Lola Berry is definitely not your average nutritionist. She blogs, tweets, writes and talks about good health and whole food, and whether she's eating a banana plucked from a New York City garbage bag or handing out black-eyed peas to celebs at a red carpet event, there's little Lola won't to do to get her message across: eating and living well is easy and fun!

Lola's enthusiasm is contagious and her knack for translating the most technical information into easy-to-follow advice has made her one of Australia's most popular nutritionists. She is constantly finding creative ways to help people make small achievable changes in their lives in order to better their health. Her September 2012 release, The 20/20 Diet, guides readers through a 20-week process that Lola promises will help them reap major health benefits. The 20/20 Diet became the number one diet book in Australia within weeks of its release.

Lola grew up in a family where health and fitness were celebrated, but by no means a focal point. It wasn't until experiencing her first 'summertime detox' as a teenager that Lola recognised what a huge impact food had on health and wellbeing. That detox opened the door to a lifelong passion, and within a few years Lola had completed her Bachelor of Health Science with a major in Nutritional Medicine at Endeavour College of Natural Health. Armed with enthusiasm and tonnes of ideas, Lola made it her mission to help as many people as possible live a healthy, fulfilled life.

In 2007, Lola began posting videos full of health tips, nutritional advice and easy, accessible recipes. People responded to her quirky approach and her ‘Fruits and Roots’ webisodes soon led to regular spots as a guest nutritionist on Channel Ten's 'The Circle' show and her first book deal for, Lola Berry's Inspiring Ingredients. Lola kept up with her engaging blog and informative e-newsletters and her online following continued to grow. Today, Lola is a regular guest on TV shows such as ‘The Project’, MIX 106.5’s nationally broadcast 'Body and Soul' radio show and a contributor to numerous magazines and newspapers. In 2012, Lola hosted the Woolworths Macro Theatre at Australia’s world-class Good Food and Wine Show.

Lola is based in Melbourne, where she runs her own nutrition clinic.