Sweat to the beat of the drums 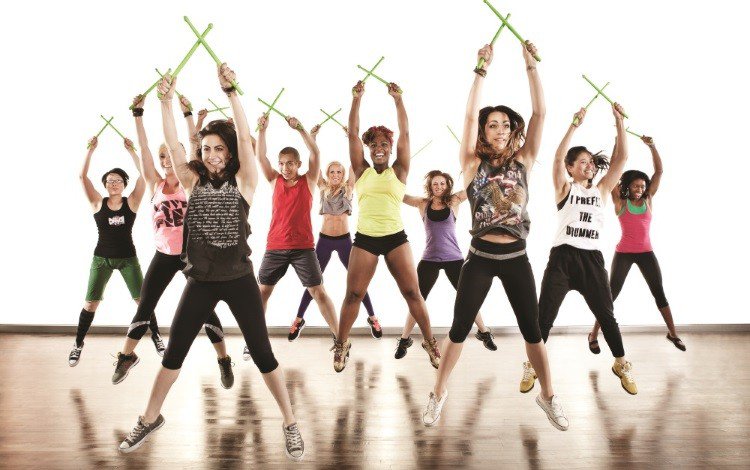 An hour of sweat, beats and the sound of two dozen pairs of drumsticks rapping against the floorboards... this is a POUND class. And if you haven’t heard of it yet, you soon will.

An hour of sweat, beats and the sound of two dozen pairs of drumsticks rapping against the floorboards... this is a POUND class. And if you haven’t heard of it yet, you soon will. It’s a new group fitness craze that uses weighted drumsticks – coined ‘Ripstix’ – and has you rocking out in a frenzy that feels somewhere between a tribal ceremony and a night on the dance floor.

The idea is that you pound, beat and drum to the music while lunging, squatting, balancing and lifting. It’s sweeping across America and is already popping up at gyms across Australia.

I visited Crunch Fitness in Los Angeles to check it out one evening. “Oh, you’re doing a POUND class? You’ll need these,” said the receptionist as he handed me a set of bright green Ripstix. I was surprised by their weight as I’d imagined them to be a lot heavier.

“You’ll have to squeeze in – it’s a full class tonight,” he finished, and he wasn’t wrong. Already a crowd of people were queuing up to get into the studio. It appeared a big portion of the group – mostly female – were regular POUND-ers, and had brought their own Ripstix from home.

In came our instructor Amber, who showed us the proper POUND technique. Had I not been surrounded by a whole crowd of other people doing the same thing, I’d have been much more self-conscious as I danced about, drummed the floor, and tapped the Ripstix over my head. Seriously though, I looked like King Louie, the music-loving orangutan from the Jungle Book.

“One thing for sure is that everyone leaves with a smile,” Donna from Crunch head office told me.

She was right – the whole class is so energetic you can’t help but have a laugh.

POUND promotes itself as offering a combination of cardio, pilates, isometric movements, plyometrics and isometric poses. To me though, it just felt like a cardio class. Being someone used to a mix of heavy weights and interval cardio, I didn’t feel the ‘resistance’ element they talked about. But as a cardio workout, it certainly did its job.

POUND founders Kirsten Potenza and Cristina Peerenboom claim one session burns anywhere between 400 and 900 calories! That’s a pretty intense workout, and as Donna pointed out there is no way to slack off in this class. You can’t secretly turn down a resistance dial while nobody is watching, or take it at your own pace in a corner. POUND is all about keeping up the rhythm, and forces you to keep moving and build up a real sweat.

It may not be my style of training, but the huge following POUND has already amassed suggests it’s here to stay. If you like your cardio with a side of fun, then get down and get drumming. There’s no way you’ll leave without a raised heart rate, and you’ll likely have a laugh along the way.

“It’s important to show people anyone can achieve great health and wellbeing and enjoy doing it at the same time. We’ve created a workout that allows people to really get into the music and be distracted from the fact they’re actually working quite hard.” poundfit.com

Looking for a POUND class in Australia?

Read more by No Author