The new face of naturopathy 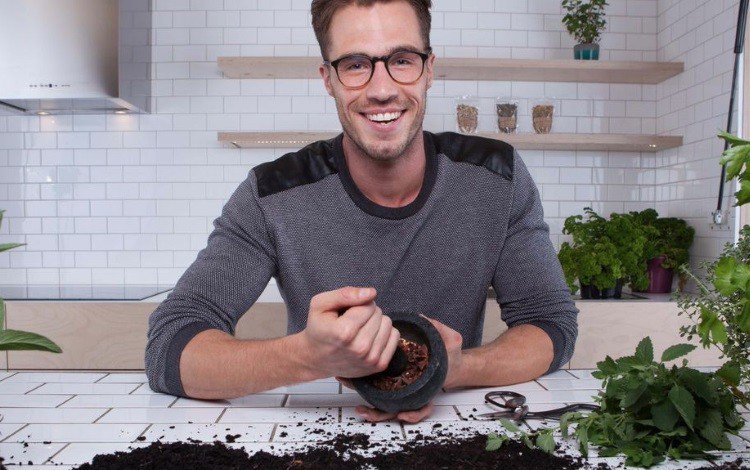 Melbourne naturopath Reece Carter tells how his unique brand of ‘garden pharmacy’ which is making the ancient art of herbal medicine new again.

He’s the new guy on the natural medicine scene who has charmed Ellen DeGeneres (yes, she flew him across the world to appear on her show), created his own product range and has been courted by the world’s leading wellness brands. He also runs his own naturopathy practice, is represented by one of Australia’s leading modelling agencies and feeds his hordes of fans daily ‘herb-nerd’ inspiration through social media. Reece Carter is throwing everything he has into bringing herbal medicine back, and the world is listening.

Melbourne naturopath Reece Carter has burst onto the world’s health and wellness stage with his unique brand of ‘garden pharmacy’ which is making the ancient art of herbal medicine new again.

Reece realised during his naturopathy studies that herbal medicine was becoming a lost art despite it once being a common household skill.

“I could see that years of running to the pharmacy when the flu hit or to the supermarket had left many people without the knowledge to manage daily health complaints with herbs they most likely had at home,” said Reece.

“It struck me that so many people didn’t have the know-how to brew a tea or infuse a tincture that could help them feel like themselves again, and I decided I wanted to use what I was learning to empower people to turn to the garden or the pantry and rediscover the potent medicines masquerading as foods,” said Reece.

Since committing to this vision well before graduating as a qualified naturopath less than twelve months ago, Reece hasn’t wasted any time. He has already launched his own range of therapeutic grade herbal teas called ‘Sum T’, established a thriving naturopathy clinic in Prahan, Melbourne and was recently appointed as athletics wear giant lululemon athletica’s first digital ambassador.

His profile has risen exponentially following his success on Instagram and his contributions to Australia’s leading health magazines and blogs, with an army of followers hanging on to his every word and jumping onboard to support his latest projects.

The fact the 26 year old has remained faultlessly polite with his feet planted firmly on the ground despite his success hasn’t hurt his public image either.

Sarah Ranawake, Partner and Editorial Director of the cult health, fitness and lifestyle website Sporteluxe.com said it was an easy decision to bring Reece on board as one of the site’s exclusive group of expert contributors.

“As soon as we connected I knew he was a perfect fit for Sporteluxe. Not only does he have a wealth of health knowledge, he also has a way of communicating that makes the world of herbal medicine relatable to our readers,” Sarah said.

“Reece makes being a ‘herb nerd’ and embracing holistic health seem stylish and cool. Which it is by the way! The fact he’s a genuinely lovely guy who isn’t hard on the eye is the raw icing on the sugar-free cake!”

Reece counted the first 48 hours after Sum T launched as the highlight of his career to date.

“It was a pivotal moment. We had been working on the launch for months and when we told the world about it our orders just exploded. It was completely surreal and all the better for having two amazing partners to celebrate the moment with,” said Reece.

Reece said much of the success of Sum T came down to his decision to choose the right business partners which allowed him to concentrate on what he did best.

“I’m at my happiest in the garden playing with herbs and creating unique blends that pack a therapeutic punch, so it was important to get a great team of business minds behind me whose skills complemented mine,” said Reece.

Using his herbal medicine expertise to collaborate with like minded brands, Reece has created new products for his partners which come with his expert stamp.

Reece has teamed with organic drinks range Tanka to craft their range of vegan, fructose friendly drinks, and more recently with new Melbourne restaurant Fred Gets to design a range of organic iced teas.

“I have loved working with companies that share my wellness ethos to create products that are naturopathically sound and allow the principles of herbal medicine to shine through,” said Reece.

Reece’s interest in herbal medicine arose when he grew up on a farm in Western Australia and tried his hand at recreating his grandfather’s vegetable garden.

“My pop was such an inspiration to me. I remember running around at his place eating gooseberries and tomatoes from his garden,” said Reece.

After volunteering in Romania and settling in London after graduating from high school, Reece’s interest in natural therapies was reignited.

“I was already so interested in nutrition and reading everything I could on natural therapies. Support for the industry is so strong in the UK it prompted me to consider studying what I already loved and becoming a qualified practitioner,” Reece said.

Considering whether to study in the UK or Australia, Reece decided to enrol in a naturopathy degree with Endeavour College of Natural Health and move to Melbourne.

A lightbulb moment followed when Reece experienced the benefits of naturopathy firsthand, seeing dramatic results after taking herbal remedies for the chronic fatigue he was experiencing.

“I not only saw my fatigue lift, but my mood became more positive and my love of life returned. It was then I realised ‘this is actually some seriously powerful stuff.”

Reece said since graduating he had realised there were infinite opportunities in the complementary health industry for those with vision and focus.

“You have to be prepared to create your own path as there is no one set career. When you have the knowledge base behind you, you have to decide what you want to create with it and think about what your contribution to the industry will look like,” said Reece.

If that isn’t enough excitement for 2014, the US is also beckoning. Based on the interest shown in Reece as a presenter, writer and author during his last trip to America, he has decided to split his time between Melbourne and California next year to invest in the next stage of his career.

“There is no one talking about herbal medicine in the States, and I’d love to fill that space by being a champion for herbal medicine and making it contemporary again,” said Reece.

Combine this with Reece’s plans to write a book and launch a new range of products, and you get the sense Australia’s favourite herb-nerd is just getting started.

Social media as a marketing tool

“80% of my business comes from Instagram if you can believe that. It was only when I found my own voice and invested in making a personal connection with followers by sharing my love of herbs that my pages really started to resonate. If you try to emulate what you see on other pages people can see through it. I have noticed since graduating that those who embraced social media as a form of marketing are seeing the benefits much faster than those who haven’t.”

On finding your own voice

“My thing has always been herbal remedies and creating them from start to finish. At first I thought noone is going to care about this, but it wasn’t until I threw that thought away that I started to find an audience. I have found by doing something you genuinely love you will attract people who are interested.”

On working hard and playing hard

“I make sure my work is something that enriches my life and doesn’t inhibit it. Part of this is making sure I go overseas every year at least once. That way, even if I work long hours and miss a weekend here or there I know when I go away I will enjoy a completely indulgence and guilt-free trip. I have all my R&R time in one hit, and if I want a massage every day I’ll do it!”

“Every Tuesday I meet an old friend at a café and we write stories over a pot of tea (usually ginger). The rules are we aren’t allowed to chat, we simply dedicate the time to writing and sharing our work. I love to write for kids because you don't have to be at all serious. I work so hard, so this is my chance to play.”