Taking raw foods to the mainstream 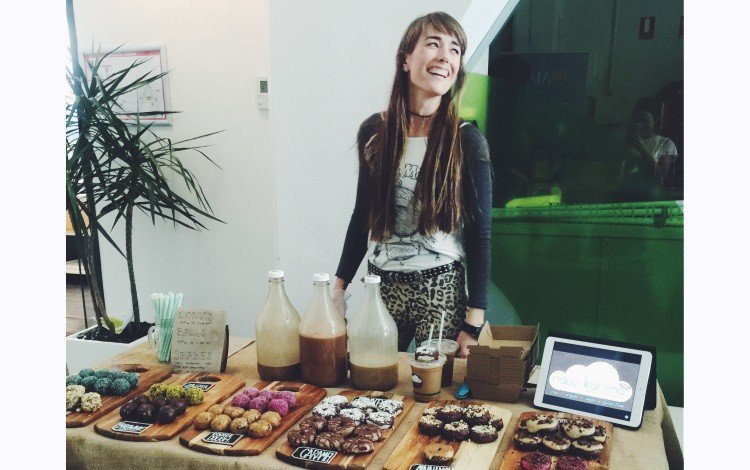 Entrepreneur Hayley Richards talks about her business is tapping into the growing market of Australians interested in healthier dessert alternatives.

When interviewing entrepreneur Hayley Richards, the following popular saying springs to mind: ’If you want something done, ask a busy person’.

The nutritional medicine studenthas managed to launch a business which has put raw foods on the map in Adelaide... all before graduating!

Hayley, 26, launched her business Raw Karma to tap into the growing market of Australians interested in healthier dessert alternatives after becoming fascinated with raw cakes that were delicious and nutritious.

“I loved opening up people’s minds to plant-based foods with no synthetic colours or additives to show them they weren’t missing out on anything by giving conventional desserts the flick,” said Hayley.

While studying part-time, Hayley started signing up organic cafes in Adelaide as stockists before her big break came in the form of a deal with dessert chain giant Cocolat who contacted Hayley after coming across her work through social media.

“I was surprised at how well my cakes were selling at Cocolat as it isn’t your traditional organic or raw food store but it goes to show there is a strong appetite out there for healthier sweets,” said Hayley.

Hayley said Endeavour College of Natural Health had been one of her biggest supporters throughout her business journey.

“Endeavour regularly places orders with Raw Karma when they have events on campus which means so much to me,” said Hayley.

Hayley is planning to launch her second eBook this year dedicated solely to raw desserts to build on the success of her first eBook Raw and Morewhich earned the praise of influential health professionals and continues to sell well. She has also extended Raw Karma's range to include 'raweos' (raw oreos) and raw macaroons.

Many of Hayley’s business connections have resulted from her popular Facebook and Instagram pages which have attracted more than 10,000 followers.

“I don’t think my business would be where it is without social media and I’m very grateful for the support of my followers,” said Hayley.

Ultimately, Hayley plans to open her own Raw Karma store where she can sell directly to customers and wholesalers.

“At the end of the day I want to share with the world my creations to show people plant-based foods can provide all the nourishment our bodies yearn for,” Hayley said.