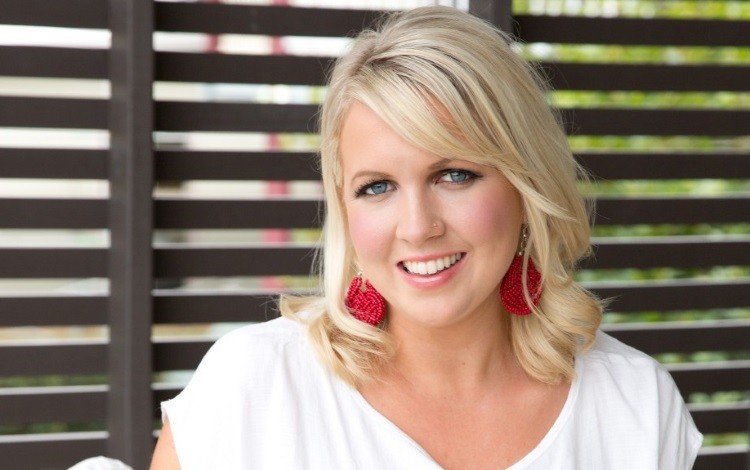 27 year old nutritionist, TV personality, cook and MasterChef grand finalist Georgia Barnes – food was always an integral part of life. It was this overriding passion, combined with a love of working with people, which led her to study nutritional medicine and audition for the hit TV show.

It didn’t take long for nutritionist Georgia Barnes to capture Australia’s heart as a contestant on MasterChef with her humble nature and holistic approach to cooking. Her tenacity and attention to detail saw her still standing at the end of one of the most gruelling cooking competitions ever seen on Australian television. Georgia is now ready to pour her heart into her two greatest loves – natural health and cooking – and the world is waiting with open arms.

For 27 year old nutritionist, TV personality, cook and MasterChef grand finalist Georgia Barnes – food was always an integral part of life. It was this overriding passion, combined with a love of working with people, which led her to study nutritional medicine and audition for MasterChef.

It turned out to be a pivotal decision in Georgia’s life, as she quickly proved she had what it took to take on some of Australia’s most talented home cooks with their eyes firmly on the prize. She swiftly caught the attention of both the public and judges through cooking from the heart and thinking swiftly on her feet week after week. It wasn’t long before Georgia started gaining further acclaim for her beautiful desserts, masterful seafood skills and stunning plating abilities.

It was Georgia’s talent coupled with a laser-like focus which saw her battle her way to the final challenge of the MasterChef 2015 grand finale after winning the first two challenges. It took the form of a dessert pressure test designed by culinary genius Heston Blumenthal.

Narrowly missing out on winning the series to competitor Billie McKay by two precious points, Georgia emerged humble in defeat and full of praise for the victor.

Georgia’s calendar has been full ever since with pop up restaurants, cooking demonstrations, a regular column with Taste Magazine, a place in the new season of foodie TV show Ben’s Menu and an ambassador role with Endeavour College of Natural Health.

She will also travel the country over the coming months to share her skills on stage at the Perth, Melbourne and Canberra Food & Wine Expos and will make a guest appearance at Cake, Bake & Sweets Show in Melbourne.

“Since wrapping up with MasterChef I haven’t really looked back. I’ve finally reached a point in my life where my love of natural health, nutrition and food are merging for the first time in my career,” said Georgia. Food styling allows Georgia to tap into her creative side, also stimulated through her experience on MasterChef.

“I’ve always been visually creative – and food is my favourite medium. I’ve also drawn, sketched and painted since I was a little girl. It’s part of who I am – and I love nothing more than expressing that through food. And how much better does a dish taste when it looks fantastic?”

From an early age, Georgia was curious about good produce – where it came from and what it tasted like. It was her grandmother, affectionately known as ‘Mama’, who influenced her love of food most.

“She never wasted a thing and would transform very simple ingredients into the most delicious dishes. When I think of food and my childhood, most of those thoughts involve her,” said Georgia. “Preparing food quickly became my happy place, where I felt at home – immersed in the creative and colourful world of cooking.”

This planted the seed for Georgia to complete a nutrition degree with Endeavour College of Natural Health after almost completing a Bachelor of Arts in Criminology and Criminal Justice. Taking a break from study to travel overseas on her own trip of self-discovery, Georgia soon realised her love of nature and health was calling.

“I thought studying criminology was what I wanted to do, but I was so young and it just wasn’t for me. I had this burning desire to learn more about natural health, and that is where it all began,” said Georgia.

Georgia said she first became interested in natural health after her mother took her to a naturopath.

“Learning how to nourish myself and helping me understand my body... the whole approach was very holistic and made perfect sense to me. It gave me a whole new way of looking at food.”

Georgia’s natural health studies marked a shift where food became about work and play. As she learned the health benefits of unprocessed and whole foods, her recipes became more complex and inventive as she discovered new ingredients and used her home cooking skills to develop allergy and intolerance-friendly recipes.

“Food as medicine is such a beautiful term to me – the most organic foods can do so much for you, and you can feel it. I swear – if you drink something green, alkaline and packed full of nutrients – it’s like your body says something to you.”

“Nutrition and naturopathy are a big part of my life and something I draw on daily.”

Reflecting on how her approach to nutrition had changed over the years, the MasterChef alumnus said her average meals now were always ‘oomphed’ with something special.

“I’m obsessed with creating recipes using wholefoods – I always throw in an ingredient packed with nutrition. Take a cheesecake for example – I might make a pumpkin cheesecake with a base made of pepitas and some extra cinnamon and turmeric, and before you know it the cheesecake isn’t looking so bad,” said Georgia.

Although Georgia's cooking is creative and inventive, she still sticks to the basic naturopathic principles, making bone broths, green smoothies and ensuring she eats plenty of fermented foods on a regular basis.

“I can't eat anything healthy or not-healthy, unless it tastes good.”

Using her profile to encourage people to become more connected with their food was another important driver for Georgia.

“Food is such a beautiful and massive part of our lives, and for that reason I’m never one to say ‘don’t eat this or that’. The last thing people need to associate food with is guilt. What I do like to encourage people to do is to make their meals at home from scratch where they can,” said Georgia.

“By not making your food you’re not touching your food, you’re not connected to it and you’re being less mindful. The more connected we are to our food the more we nourish ourselves – there is more balance in our lives this way and there truly is a better health outcome.”

Concerned by the fascination with clean eating and fad diets, Georgia is quick to advocate a more balanced nutrition philosophy.

“Life is about balance and happiness,” said Georgia.

“When we fret about food choices we disrupt the mind body connection. The key is to be mindful and in the moment when we eat. For me, I’m not a size 8 anymore and I definitely break the rules every now and then, but I’ve never been happier.”

When asked what she had learned over the whirlwind of the past 12 months, her response is swift and sure.

“Never underestimate what you can accomplish when you believe in yourself.”